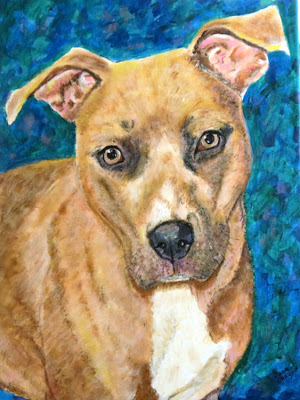 This is Lotus, a pit bull, who was rescued from a canal in Saint Petersburg, Florida, in May, 2011. She was four months old and she had a heavy metal chain around her neck and a filthy collar. She was tied to a board with electrical wire and she was floating on it in the hot sun. She had no hair because of a severe skin condition. Someone saw her and brought her to Pet Pal’s clinic where she was loved and cared for. It was a whole week before she barked because she was so weak and exhausted. Once she started to feel better, she was a happy puppy. Pet Pal continued to treat her and when she was well enough she was socialized with dogs, cats and children. She was named Lotus after the flower that comes out of the muck and becomes a beautiful thing. She was adopted September 29 by a couple from Bellair who have other dogs and a large fenced in back yard after the TV station did a follow up story on her. She is so happy, well cared for and loved.

Posted by Joan Grayson at 2:58 PM No comments:

Joan Grayson
I retired from my position as a Registered Nurse on a busy Geriatric Psychiatry unit at a teaching hospital in Connecticut. In July, 2009, I moved to St. Petersburg, FL, and now I have time for family, church and art. I feel so very blessed. I am a portrait artist and I paint people, animals and sacred art. I have had no formal training in art and prior to October, 2001, I didn't know how to mix paint, let alone draw. At that point I was given the gift of creativity and I have been painting ever since. Animals, especially cats, are my frequent subjects. But I also love to paint Jesus, the saints and Mary. I have been inspired by the great masters including ElGreco, Rembrandt, Botticelli, Degas, Van Gogh and others. What a joy it is to paint from their masterpieces. On these blogs I am sharing my art with you. If you would like to use any of my sacred art images, please contact me.